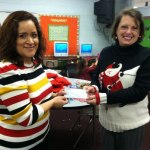 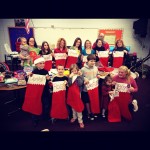 MURFREESBORO — In a large workroom at Mitchell-Neilson Elementary, a group of moms and children gathered around tables topped with everything from candy to small trinkets and toys.

“We’re going to stuff these stockings will all these things. Just go around the table and pick one of each thing and go around until you fill each one,” says Tairra Gofourth, handing each person a large stocking.

The group of people, members of a newly formed charity called Club Youth Empowerment Services (YES), are filling up stockings that will go to homeless children in the Extended Schools Program at Mitchell-Neilson. On Tuesday the children Club YES are serving will be honored with a holiday party with gifts and goodies, and even pictures with Santa they can take home.

There are 47 students at the elementary who are homeless, and approximately 1,000 homeless children in the entire Murfreesboro City Schools system, says Leslie Walker, director of the ESP program at Mitchell-Neilson.

“It just broke my heart to see all these kids who don’t have what my children have,” Walker says.

“God told us to love everybody and this is a small way we can show our love,” Malingowski says.

Malingowski’s family has seen its share of tough times, especially when her family was without a car and then later, were victims of fraud. “We were so blessed with help and we wanted to give back,” Malingowski says.

Even her littlest daughter was helping mom stuff stockings with everything from shampoo to gum and toys.

“I want my kids to go through life knowing that giving is more important than getting,” Malingowski says.

Although it was a daunting task to fill all 47 of the stockings at Mitchell-Neilson, each one has been adopted and all the children were sponsored to attend ESP at Mitchell-Neilson for another semester. The cost for a scholarship to ESP is $40 per child, Walker says.

With three girls of her own, Leslie Walker, Extended School Program leader at Mitchell-Neilson Elementary, understands the need children have for time and attention.

So she approached Gofourth for help, and the two friends started Club YES (Youth Empowerment Services) to help the homeless children at Mitchell-Neilson, with plans to expand the project to all homeless children in the school system.

When Gofourth heard about children at Walker’s school, she couldn’t stop crying. Although Gofourth and her family have gone through tough times like many others, they’ve never been homeless or without food.

“The school system does consider any child homeless who doesn’t have a permanent residence, whether it’s in a hotel, in a tent, in a car or staying with friends. Most of the children I’m aware of are in hotels, and that’s not a safe place to be,” Gofourth says.

Clothing is another necessity. Currently Gofourth has opened storage in her garage for Club YES to use. Clothing donations can be taken there and when a child is referred to Club YES, items in that child’s size will be given to the family.

But there are things these children want that money can’t buy, Walker says.

“They want time. One little girl told us she wanted her fingernails painted, that she’d never had them painted. Two other girls just wanted their hair braided,” Walker says.

Finding a mentor for each child is another mission of Club YES. Many need quality one-on-one time while others may need homework help. Each person who volunteers will go through a background check, for safety reasons, of course.

“Every little thing can benefit these children. I don’t think people realize what these gestures do for these kids,” Gofourth says.

“We need someone to commit to one hour, one day a week. Three-fourths of the kids have to leave at 4:45 for the late school bus to take them home,” Walker says.

The program will evolve as needs evolve, Walkers says. But there will always be a need for these children.

“Our goal is to say yes to the children who often hear no to simple questions like, ‘Where will my next meal come from?’ or ‘Where will I sleep tonight?’ or ‘Who will play with me?’” Gofourth explains. “They are worth so much more than the situation they are in.”